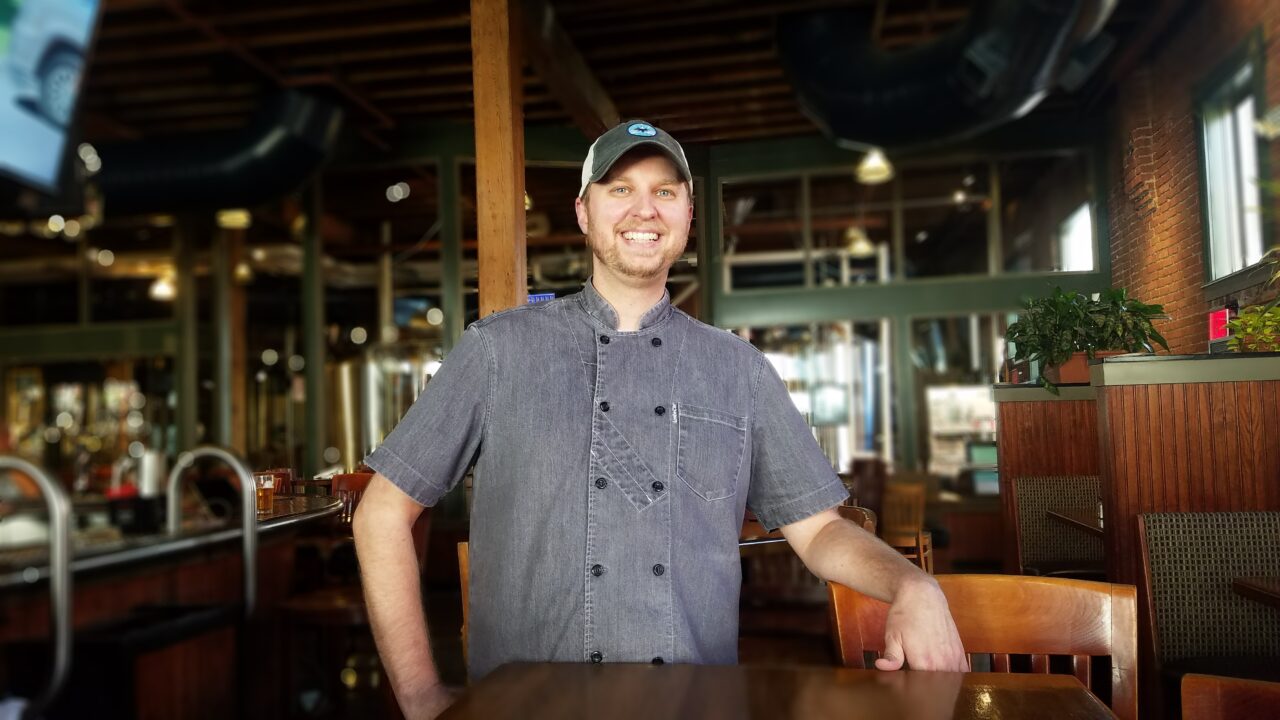 We are honored to welcome our newest member to the Springfield Brewing Co team: Food & Beverage Director Zach White. Well known in the Springfield foodie scene, chef Zach brings creativity, expertise, and new flavors to our traditional pub fare. His signature consists of a mixture of familiar and unexpected flavors all while sourcing local ingredients whenever possible.  We were thrilled to sit down with chef Zach and learn more about what drives him, inspires him, and what he has in store for SBC.

Zach grew up on a small farm outside Rolla, Missouri, learning to cook at a young age with his family, and fostering a love for being in the kitchen.  He was afforded the opportunity to accompany his parents on business trips while growing up, which allowed him to see the many aspects of Food & Beverage operations, and try many different foods.  He began washing dishes at Clary’s Restaurant in Springfield, MO, trying to learn as much as he could from the greatest group of people he’s ever worked with, from there he had a unique opportunity to work on St. Thomas as a Sous Chef at Randy’s Bistro, as well as Head Chef positions at Flame and Touch in Springfield.  His most profound and best experience was opening Hotel Vandivort and The Order in Downtown Springfield with Billy, John, and Karen McQueary, and the amazing crew there. It was a heart and soul project and they poured so much passion into, sharing the same vision, and the result was a beautiful property with a family of deeply connected people.

What is one ingredient you couldn’t live without cooking with?
Salt

Favorite way to cook with beer?
Marinades and braising for sure, and sometimes grilling with one in my hand

What was the best meal you ever ate? and the worst meal?
I have had lots of great meals over the years, but I think my favorite was halibut fish and chips, kumamoto oysters and smoked salmon from a No-Name seafood shack outside Seal Rock, Oregon.  As far as the worst, I have tried to forget about those.

What do you think are the best skills that you bring to your job?
Experience, and a willingness to create a learning, creative and fun atmosphere.

Favorite ethnic food to eat or cook?
I love Caribbean island cuisine due to its influence from so many cultures, the diversity each island presents.

Do you have any skills or talents that most people don’t know about?
Well maybe, but they’re a secret, so that’s why they don’t know.

What’s the best recent food trend? and any trends you’d like to see die?
The best trend over the last few years has definitely been the utilization of more local products.  The trend I want to see die are the platforms for the Social Media warrior critics

Tell me someone you admire and why?
John Muir, the Father of our National Parks, was the most influential person in helping create Yosemite, and helped bring the idea of parks and conservation to life.

If you could invite any three people, dead or alive, to dinner who would they be and why?
Theodore Roosevelt, Franklin D. Roosevelt, and my brother, Jeremy.  It would be a very thought provoking conversation, and I would love to talk to my brother again.